(1929-2006) In 1955 graduated from the National Art academy in Sofia specializing in painting in the class of prof. Ilia Petrov.
Specializes in Paris, France.
Later joins the Institute for Conservation of Cultural Heritage at the Ministry of Culture in Sofia, as he is responsible for Eastern Bulgaria. His main occupation was a restorer, for which he has been taught by the well-known prof. Ondrachek in Prague, the Czech Republic. After that he went on a specialization in Halle, Germany.

During 15 years he continues with his restoration activity at the territory of Bulgaria. He has restored the temples in Burgas Sta. Bogoroditsa, St. St. Kiril I Metodiy, churches St. Stefan and St. Spas in Nessebar, Sveti Kliment at St. Anastasia Island, Bachkovo monastery, Aladzha monastery.

On 6 December 2000, Zabersky was awarded the title Honorary citizen of the town of Burgas. The artist has dozens of one-man show. His works are owned by many galleries in the country, as well as by many private collections in Europe and America. 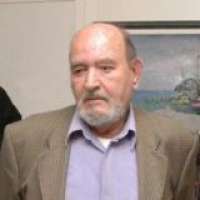