Violeta Christova Maslarova (1925-2006) was a noted Bulgarian artist known for her romantic and moody seascapes. Along with Georgi Baev and Kiril Simeonov she was often referred to as one of the Bourgas Colourists.

Violeta showed and early aptitude for drawing. This was encouraged by her teachers and her mother. She was admitted to the art academy in Sofia in 1944, where she studied under Professor Detchko Ouzounov, himself a friend of Jules Pascin, with whom he had studied painting in Berlin.

In 1966 she was awarded the Order of Cyril and Methodius for her services to the arts.

She was named as the Artist of the Year in 1999 and elected an honorary citizen of the city of her native Bourgas in 2000. Her best work remained her seascapes, with their tender palette of muted blues, violets and purples. 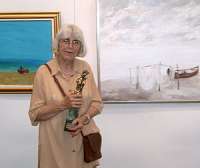